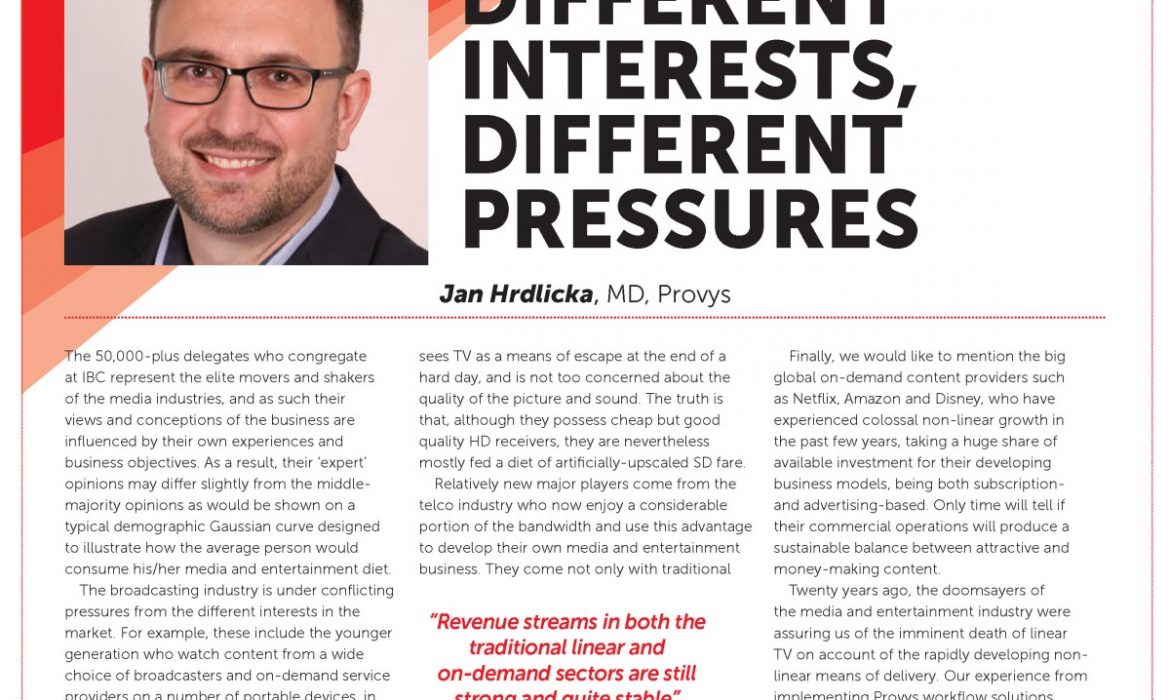 The fifty thousand delegates who congregate at the annual IBC represent the elite movers and shakers of the media industries, and as such, their views and conceptions of the business are influenced by their own experiences and business objectives. As a result, their “expert” opinions may differ slightly from the middle majority opinions as would be shown on a typical demographic Gaussian curve designed to illustrate how the average person would consume his/her media and entertainment diet.

The broadcasting industry is under conflicting pressures from the different interests in the market. These include, for example, the younger generation who watch content from a wide choice of broadcasters and on-demand service providers, on a number of portable devices, in an infinite variety of locations and are, therefore, not too concerned about the resolution and technical quality. Further pressures come from those consumers who invest in the highest quality devices and consequently, they are sometimes disappointed if they do not enjoy the highest quality reception. These two groups are in contrast to the average domestic viewer who sees TV as a means of escape at the end of a hard day, and is not too concerned about the quality of the picture and sound. The truth is, that although they possess cheap but good quality HD receivers, they are nevertheless mostly fed a diet of artificially upscaled SD fare.

“Revenue streams in both the traditional linear and on-demand sectors are still strong and quite stable.”

Relatively new major players come from the telco industry who now enjoy a considerable portion of the bandwidth and use this advantage to develop their own media and entertainment business. They come not only with traditional linear delivery e.g. live sports, but also with new platforms and generally non-linear means of delivery. Provys has been working closely with some of the major telcos, such as BT Sport, and not being too immodest, I should say that they are entirely satisfied with our support when entering the media and entertainment domain. Finally, we would like to mention the big global on-demand content providers such as Netflix, Amazon and Disney who have experienced colossal non-linear growth in the last few years, taking a huge share of available investment for their developing business models, being both subscription and advertising based.

Only time will tell if their commercial operations will produce a sustainable balance between attractive and money-making content.

Twenty years ago, the doomsayers of the media and entertainment industry were assuring us of the imminent death of linear TV on account of the rapidly developing non-linear means of delivery. Our experience from implementing Provys workflow solutions demonstrates that their fears were ill-founded as revenue streams in both the traditional linear, and on-demand sectors are still strong and quite stable. Provys develops sophisticated software for both linear and non-linear operators and we look forward to welcoming you on our stand, 2B49, at every IBC.