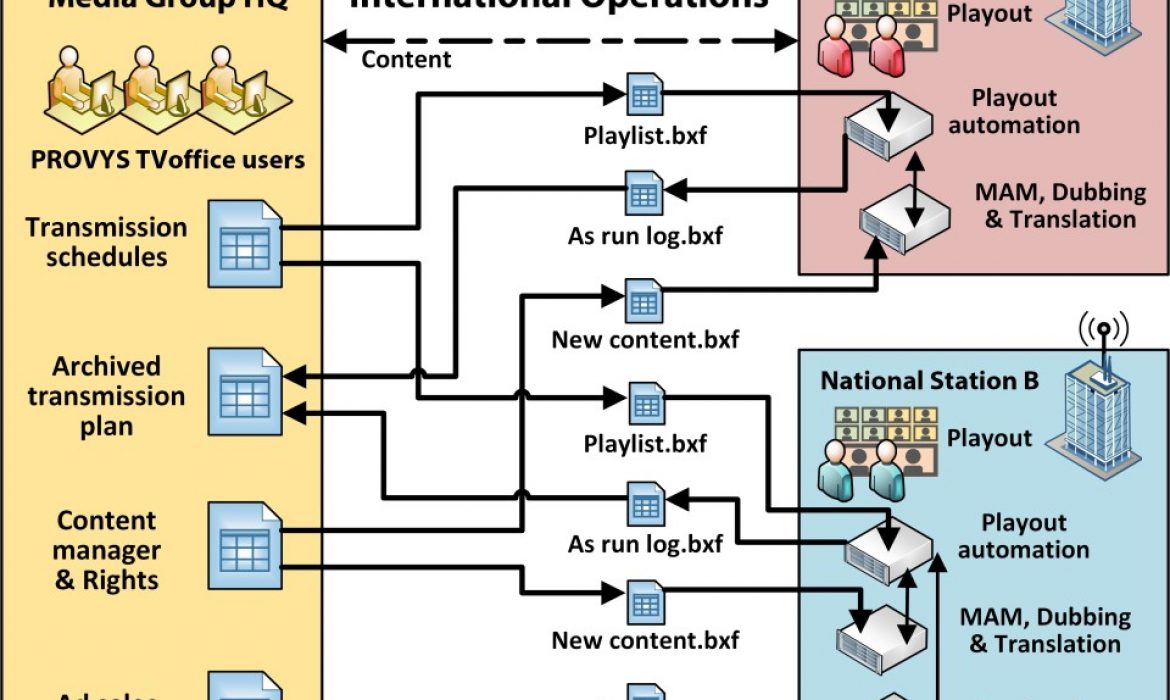 To all those who have experience standing on the booth of a media management solution provider at one of the global broadcasting trade fairs (e.g. NAB or IBC), the following scenario will not be unfamiliar, namely: a prospective client or partner approaches the booth and asks politely if the offered solution is BXF-compatible. A psychologist would have great fun watching the face of the guy on the booth as s/he responds positively, knowing the answer is “yes” on account of the flexibility that BXF offers, but silently worrying in case this particular request may cost the company an arm and a leg to develop.
BXF (Broadcast Exchange Format) is an XML based standard for data exchange in the broadcasting industry formally defined by SMPTE. It was developed to supersede numerous archaic types of exchange for playlists, record lists and various other data in broadcasting. The first version was published in 2008. Unsurprisingly, only 150 SMPTE members were required to ensure the definition of the standard. Readers familiar with “Baby Snakes” by Frank Zappa will realise that he also was a dedicated fan of theirs.

Switching the mood now, SMPTE and BXF require some practical de-mystification. The second release (BXF 2.0) valid from 2012, was followed by the widespread adoption of this standard for interoperability between and among multiple media management systems. Serious collaboration on the BXF standard across the global broadcast industry today delivers structured XML information for traffic systems, automation solutions, MAMs and more, with clear and specific mapping instructions. BXF currently provides a robust yet flexible communication schema which efficiently addresses today’s complex array of delivery platforms together with targeted advertising, a critical element of modern media business.

“ We have been using BXF in numerous projects over the past ten years.”

“For us and other developers, BXF comprises a suite of documents standardising messaging protocols for information exchange. It does not limit the actual communication media for transmission and reception. For example, you can simply leave your BXF message in a defined folder where it is picked up, read, hopefully understood by the recipient. We have been using BXF in numerous projects over the past ten years. It has provided an excellent solution to the need for the exchanges of schedules/playlists, as-run logs, content metadata, and content transfer instructions between various systems including editors, scheduling, automation, sales, billing and even MAM equipment” says Petr Dolejsi, Senior MAM Consultant, Provys. “Since the launch of BXF, many improvements in the schema have become available to the users and it is important to note that the Provys schema perfectly matches that of BXF thereby guaranteeing the highest levels of interoperability” Petr added.

As the diagram illustrates, BXF facilitates multinational communication between broadcasting headquarters and their foreign subsidiaries. Metadata flow both out and in seamlessly, between various systems and differing national requirements. Developers confirm that the standard today is affordable, well-described and user-friendly although they would prefer to see more examples from SMPTE to learn from. The original concern that the “Private Section” sitting outside of the schema would be over-utilised as a “workaround” has been overtaken by the latest definitions of the BXF standard which exactly reflect the needs of the modern broadcasting industry.

We all know the IBC 2020 is no longer a physical event. However at least the IBC virtual showcase starts today! See #PROVYS among the exhibitors! http://shorturl.at/ekBFH

Welcome to Day 1: Epis 1: #OnLocation at @IBCShow hosted by @24i_Media CEO Martijn van Horssen from the RAI #Amsterdam. How to stay competitive, the heightened importance of collaboration, and why we should stay positive and keep having fun! #IBCshow https://hubs.ly/H0vNf_W0